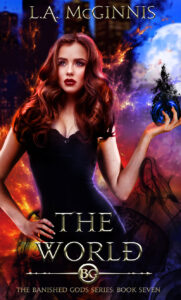 Freedom has a price.

And the time has come for it to be paid.

Ava Burke has been a pawn in the game between the immortal gods for longer than she can remember. Even before she was killed on the streets of Chicago.  Tormented in the Underworld, now claimed by the dark god, her only hope is to become strong enough to rival him.

But her time is running, out, and only two paths remain: Ava has to become the woman she was meant to be, and rise to save her dying world, or give into the darkness inside her and rule at the dark god’s side forever.

Ava wanted to touch him. She wanted to run her hands over Odin, make sure he was real. Make sure he was hers. Lowering her bad foot gingerly to the ground, she steadied herself against the Hummer.

“I’ve missed you,” she finally said and swore she saw relief in Odin’s silvery eyes. “Every day, trapped inside my head, I thought of you. And then you came for me one day.” Her voice filled with wonder, even now, at the memory.

And still, he just waited.

“Was any of what you said true?” Ava finally asked, heart thumping. “Or was it only to help me break free?” She hurried on, scared to hear his answer. “Because if it was only to help, that’s okay, too. I totally get it, we’ve been enemies, and…”

Somehow, he’d moved to her, and now she was staring down at the front of that awful, bloody shirt. With a finger, Odin tipped her face up to his. “Everything,” he told her in a rough whisper. “Every single word I said that night was true.”

She sobbed out a breath, then sniffed.

“I’ve loved you for so long, I don’t think I even know when it started,” he told her softly, his thumb now caressing her cheek in languid circles. “Only that you’ve ruled my thoughts…” He kissed her forehead. “For so long now, I can’t even imagine you not being in them.”

His lips traveled down to her cheek, lingered there for a long moment while she waited in anticipation.

“All this time…every moment you’ve been gone, has killed me inside.”

She closed her eyes, savoring his warm breath on her lips.

“And now that you’ve come back to me, all I can think of is what you taste like.”

Finally, Odin claimed her lips, his kiss sweetly chaste. “Perfection,” was all he said as he drew back, his silver eyes glowing.

Finalist in The Paranormal Romance Guild’s 2020 Reviewer’s Choice Awards for best urban fantasy series-this is the seventh installment of the Banished Gods series, and this full-length book features a broody king, a reluctant queen, epic battle scenes, a little bit of snark, and a stunning conclusion to this fantasy adventure!