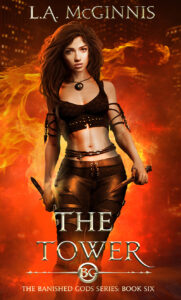 In order to rise from the ashes, first, you must burn.

Once, Gabriella’s deadly skills were for sale to the highest bidder. These days, she’s has traded in her blades for a stethoscope, and put her past behind her.

But even her good deeds haven’t erased all the bad she has done in her lifetime.

Perhaps nothing ever will.

When her world collides with Balder’s, and she discovers a world of immortal gods, demons and monsters, it turns out her skillset might be just what the world needs to tip the balance in its favor.

“You do realize, this is pretty much a suicide mission.” Baler’s arms tightened around Gabriella with those words.

“It is. And it’s stupid for both of us to go, given the odds,” she murmured before she settled into him, her body softening.  “You should stay.  Go north and pick up Celine and the others. If you keep moving, you can stay ahead of the enemy, I can tell you how.”

She laughed, the sound vibrating against his chest. “Who am I kidding, you’ve been alive forever, you probably know it all, don’t you?”

“I don’t know everything.” Balder countered softly. “For instance, I don’t know what your favorite flower is. Or if you like sunsets or sunrises better?”

Gabbie went so still in his arms, that for a moment, a shudder of fear went through him. And then she brushed his chin with her lips, nibbling, tasting, feeling her way along in the dark, her fingers twining in his hair. “Who knew,” she whispered, “that I’d end up with such a hopeless romantic?”

“Well,” Balder said, neatly flipping their positions until he was on top and her underneath, “one of us has to be.”

“So true,” she answered, pulling him down until they were nose-to-nose. “This might be a terrible idea, you know. Sex. On the eve of a suicide mission.”

Balder’s lips stroked up the side of her face, her skin like velvet, pausing to press a kiss to the birthmark on her chin. “I don’t give a shit. Right now, I don’t care about anything except the feel of you against me.” To prove his point, he shifted slightly, so he lay cradled between her thighs.

For once, her eyes were unguarded, liquid pools of chocolate brown, rimmed with long lashes, swimming in desire. And then he kissed her.