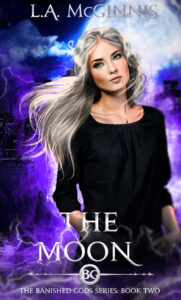 My life. A literal nightmare.

Ever since she was born, Celine has wanted only one thing. Freedom.

But a dark god took that freedom away when he decided to share her personal headspace.

Now he owns her. Controls her.

Even though she’s done everything to banish him back to where he belongs. In Hell.

Fenrir has endured a lifetime of servitude, bound to a destiny ordained by the gods. He’s a prisoner, until he meets Celine, and the tenacious human steals his heart. But when the world shatters around them, Fen is forced to make the ultimate choice between love and fate.

“So you really are a wolf?”

Fenrir nodded, falling into the chair again. Celine’s smile turned part mischievous, while she teasingly ran a finger across the expanse of his shoulders, listening to his breathing turn ragged. “I love wolves. Have I ever told you that?”

She circled him, feeling cast adrift, as if Fen was the anchor and she was a whirlpool, being drawn inexorably inward.  Reaching out a hand she traced his arm, chest, shoulder, back, slowing as the gravity of him pulled her in, pulled her to a stop right in front of him.

“I can’t seem to think straight today, Fen,” She whispered, leaning in.  “All I can do is feel. And I’m feeling way too much.”  She ran her hands up to cup his face, searching his eyes, that beautiful darkness shining inside of them. Before she changed her mind, she pulled his mouth to hers. She wasn’t sure what he was going to taste like or even what she was going to do, but she wanted to feel those lips against hers, she wanted to feel him against her. She liked how she felt when she was around him.

Grounded, attached, instead of feeling like she was about to fly off the edge of the world.

“Celine. Baby.” Since those words made it sound like he was going to try to stop her, she pressed her mouth more firmly to his and found he tasted wonderful, dark and rich, the same way his gaze felt when he was staring after her, or his hair felt when she was running her fingers through it.

And then his mouth was on hers, searching and hot, and he pressed her lips open and drove his tongue in between her teeth. Brushing it along them, sweetly teasing out ripples of pleasure inside of her that crested to the surface, he made her push her body against him, fit her soft parts into his hard ones. She gasped softly against his mouth as his hands pressed her hips firmly to his, opening her up to fit himself in between her legs. A long, spiraling trail quested its way up through her. This was what she’d been wanting. This was what had mystified her when she’d looked at the boys and girls and wondered.

It hadn’t been her after all, she’d only been waiting for Fen.

But now? With this man, it was the only thing she wanted.

Celine supposed she needed to breathe, but this kiss was simply too good to stop, so she dove in even deeper, seeking his tongue with hers, tracing his teeth with the very tip, feeling the length of them, the sharpness, the keenness of them. When the groan built up in his throat and exploded against her mouth, she felt a sly kind of pleasure, a woman’s satisfaction that she’d made him sound like that, and she wanted to hear him do it again. And again.