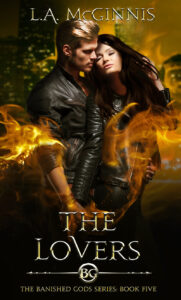 Lilly Domenic has stolen from the rich. The Famous.

This is her life, navigating her crime family’s dangerous world, hoping to survive another day. But when her brother gives her one final task to complete, Lilly finds herself in over her head.

Freyr, the God of Love, has lived a charmed life, until he was thrown headfirst into a war with the most powerful god in the universe. Determined to prove he takes the mission of the gods—protect the earth at all costs—seriously, his new goal becomes his calling. Little does he know he’s allowed a traitor into their midst. One who will jeopardize everything they’ve fought to safeguard.

Trapped between the immortal gods and a brother who is determined to have his revenge, Lilly risks everything to fight for the one thing she never thought she deserved.

“Finalist in The Paranormal Romance Guild’s 2020 Reviewer’s Choice Awards for best urban fantasy series-this is the fifth installment of the Banished Gods series, and this full-length book includes the God of Love, a heart-of-gold con artist, some rocking love scenes, an epic demon battle and a balcony scene you won’t ever forget!”

“If I just had one wish, do you know what it would be?” Popping a strawberry into her mouth, Lilly leaned back on Freyr’s bed, her eyes squeezed shut in bliss.  “That I could just stay here, forever.”  As soon as the words came out of her mouth, her eyes flew open and she froze.

“That’d work for me.” Freyr offered her a bite of the toast, honey dripping down his fingers.  “As long as I can feed you in bed every morning.”

She pulled his hand back to her mouth, deliberately licked the honey from his finger, her pink tongue flashing out, up, and over his fingertips before drawing one into her mouth.

“That would totally work for me too.” She leaned back, a mischievous glint in her eye. “Good thing we’re on the same page.  What about everyone else?”  Freyr wasn’t so sure about the rest, but he thought back to the cool, inhospitable welcome Hunter received a few weeks ago.  “They’ll come around.  In time, they’ll see you for who you really are.”

“So you’re an optimist, I see,” Lilly teased gently. “Well, don’t be too surprised if they disappoint you, Freyr. I learned a long time ago to set my expectations low.” As if she couldn’t help herself, she ran a finger along his face, her touch featherlight, her voice barely a whisper as she said, “You are so beautiful. Otherworldly, really, how can you possibly be real?”

The words never held the weight they did right now, not coupled with the adoration he saw shining from her eyes. “The way I look, Lilly… It doesn’t matter, not really. But when you say these things, I feel as if I’ve waited my whole life to hear them. Except that probably doesn’t make any sense, does it?”
Tilting her head, she shrugged, “I thought about you every minute I was locked up, Freyr. Sometimes I think…you’re the only thing that kept me sane.” He was falling further and further into those depthless eyes of hers.

“And I spent every single night out looking for you.” Because he couldn’t stand it any longer, Freyr dipped his head and ever so gently kissed her, tasting honey and strawberries.