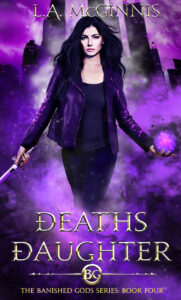 After a thousand years as enemies, their paths will cross again.

Hunter Wallace’s luck just went from bad to worse. Case in point? The immortal god she’s managed to avoid for centuries has become her only hope for survival.

Destined to a life of endless conflict, Tyr could never forget the fierce Scottish princess he left behind. But a thousand years hasn’t dimmed her hatred for him and when she shows up on his doorstep, he discovers that flame still burns bright.

With her home reduced to ashes and a heart haunted by the past, Hunter’s only chance at revenge is to join forces with the immortal god whose life has been forever intertwined with hers.  In a world ravaged by war, Hunter must discover why Tyr’s greatest treachery was also his greatest gift.

Finalist in The Paranormal Romance Guild’s 2020 Reviewer’s Choice Awards for best urban fantasy series-this is the fourth installment of the Banished Gods series, and this full-length book includes one pissed off female, the God of War, and portals to other dimensions—experience this enemies-to-lovers HEA!

Sinking her teeth into her bottom lip, Hunter looked him over, her gaze gobbling up every square inch of him, every bit as greedy as he was staring at her. When her fingers curled into loose fists, and her breaths quickened, Tyr asked, “Like what you see, princess?”

“Oh, I do,” she whispered, stepping closer. “I very much do.” Another step and she closed the space, almost within touching distance. Except Tyr stayed put. Ever so slowly, she reached out and pressed a fingertip to his throat, then traced it down, over his collarbone, between his pecs, down along his abdomen and over the angry, still-healing scars, and lower still, to where the sheet tented up.

“I tried, you know.” A half-smile crossed her face. “I tried not to fall in love with you. But I don’t think I was ever successful. I might have loved you from the very beginning. All of that hate, it was some form of twisted love, but I never wanted to admit it.”

“What about now?” Tyr asked, now sure where this was all going.

“Now it’s just love.” And in truth, that’s what shone in her golden eyes, brilliant and clear. Love with a hint of tears.

Now Tyr did move, circling her wrist with his hand, drawing her in. “Then we’re even. Because I’ve loved you ever since the day I saw you on that horse in front of your father’s castle. So before we waste any more time, I believe you started something. Care to finish it?” A long, slow blink and then a creamy smile spread across her face.

Climbing up onto the bed, she pointed out, “I’m not sure I should be starting anything with an invalid. Maybe the real question is, are you up for it?” Hauling her across him, Tyr groaned at the lovely friction of her body on his while need surged through his veins.

He wanted her. Now.

Hand tangled in her hair, he drew her into a gentle kiss. Slowly and sweetly, taking his time, stroking her velvety lips with his tongue. After fantasizing for so long about what she tasted like, she tasted like nectar. So luscious, he drove his tongue between her teeth and she sucked him in, devouring him with the kiss, her body twisting to align with his, hips grinding up and down along his cock. One hand braced on his chest, she reared back.

He pulled her head down, kissed her again, feeling her body quake. Breaking away from her pink mouth, he stared hard into her eyes. “I’ve waited long enough for this,” he told her. “I’m taking my fucking time tonight. Which means I’ll give you whatever you want, angel. But it’ll be together. You okay with that?”

She managed a faint nod, her eyes darkening to amber, her pelvis rocking up and down against his. His hands wrapped around her hips, stopped her while she groaned. “Now, now, none of that, you are going to wait for me.”

“Tyyyyrrr.” She drew out his name as he slowly rolled her to the side, his ribs aching. The next second, he had her exactly where he wanted her, spread out beneath him, her hair a black curtain across the white pillow, a thin camisole and a slip of black panties the only thing between him and paradise. His only question was where to begin.

“Why are you looking at me like that?” she asked softly.

“Because I’ve imagined this moment for so long. And now that it’s finally here, I want to savor every second of it.” Tyr slid a finger beneath the bottom edge of the camisole, meeting her eyes solidly before he began easing it up. Her skin… It was like satin. No, it was satin. Creamy, ivory satin, revealed a bit at a time, his fingers skimming over every perfect square inch, the slow, deliberate contact making her writhe beneath his touch. When he finally cupped her breast, his thumb brushing her nipple, she gasped and arched into his touch, mouth open, eyes closed.