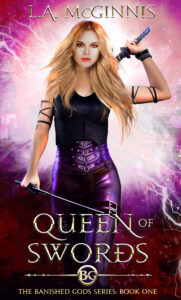 My mother always told me that some day,

there’d be hell to pay.

I never believed her. Then I died…

Returning to Chicago to avenge her family, Morgane Burke spends her nights on the streets, battling demons no one else can see. Her tally might be growing, but so is theirs, as human disappearances mount by the day. Her one-woman war on evil takes a turn the night she discovers she’s not the only one fighting the monsters.

Banished to Earth, the immortal gods are tasked to protect the human race, and Loki is on the hunt for the demon slayer who’s infiltrated their territory. When he discovers the half dead mortal female, the God of Fire realizes he’s met his match.

As evil of another sort rises, Morgane forges an alliance with the gods to survive. But even Loki cannot protect her when the Goddess of Death comes to claim her soul. Together, they discover love is more powerful than betrayal.

Escape into this sexy fantasy, where two ancient races collide and the fate of the world hangs in the balance.

“I don’t…” Morgane caught Loki’s face between both hands and held him still, her thumbs rubbing slow, cautious circles on his cheeks, her face shimmering with a mix of wonderment and desire.

“I don’t do this…ever.” She chuffed out a laugh. “I had to point that out. So you didn’t get the wrong idea.”

Which meant he should go slow, Loki told himself. Slow and gentle.

Morgane tugged him down, her lips a soft brush against his own. And when he pulled away, far enough to watch her face, to know for sure, she breathed her answer. “Don’t you dare stop.  I’ve waited forever to feel like this. For someone like you. Don’t make me wait any longer.”

Her green eyes searched his, and he lowered his mouth to hers, a kiss meant to be every bit as soft as hers. But then she groaned against his mouth, plunging her tongue inside, demanding things of him, things that, by the gods, he meant to deliver. His hand encircled her breast, fit it to his palm before pulling the nipple into his mouth, heard her moan as it went hard and erect, writhing, arching up into his touch, as if she couldn’t get close enough. He held her still beneath him, trembling, as his other hand slid down over her belly, paused at the apex of her thighs, his finger circling slowly while she shuddered.

“Let me make you feel good, Morgane. Let me do this for you…” She moaned when he moved to her other breast, biting her nipple gently while she writhed up off the bed and buried both of her hands in his hair. His tongue worked its way down her stomach, and she opened for him, spreading to accommodate him, both hands wound firmly in his hair. Hooking both of her legs over his shoulders, Loki held her fast with one hand on her stomach, trapping her against the bed, and ran his fingers up the inside her thigh. The only place where her skin was perfectly smooth, unblemished. He skimmed the mound of light blonde curls before he drove a finger inside her and felt proprietary male satisfaction when she cried out at his touch. She smelled divine. Peaches maybe, or plums, but he had to….

“A taste, Morgane, I have to taste you.”

Unwrapping her fingers from his hair, she slowly raised her hands up and grasped the headboard, never taking her eyes from his. And smiled. Seductive and inviting.

Every thought in his head was lost to the roar as he pushed her legs wide and licked straight up through the middle of her. Then she was bucking under his tongue, the pressure of his hand on her the only thing grounding her while he pushed a finger into her, his mouth sucking and pressing, her moans growing louder and louder. Her movements grew wilder, and damn it, he was close to his own release as she went completely taut. A glorious moment of stillness while he watched her go over, her head thrown back, her hands fisting the blankets and her body…her beautiful body frozen in the orgasm he had given her.