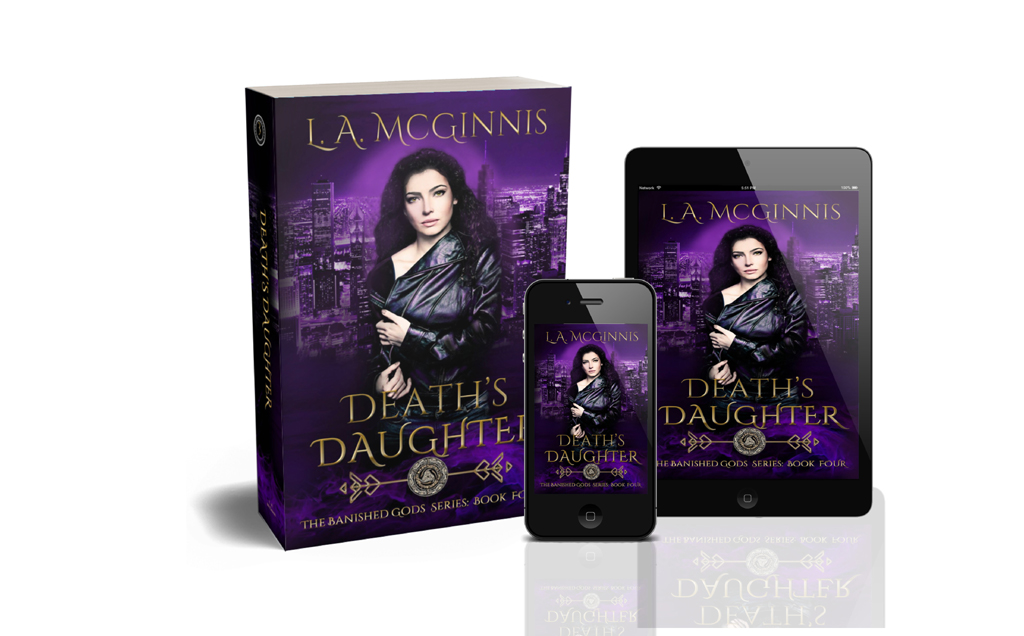 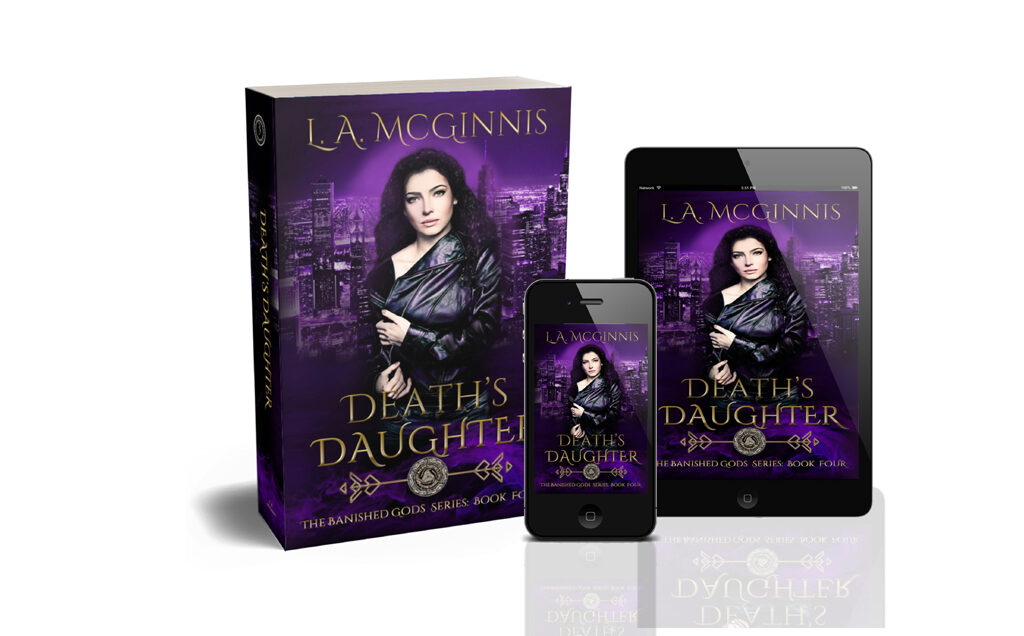 Death’s Daughter is Available for Preorder!!

The latest installment in the Banished Gods series is now on Amazon- and I am so excited about this gorgeous purple cover!!  The release date is set for Tuesday, October 15th, and here is a sneak peek at Chapter One:

Even though it was the last place she wanted to be.

Hunter hated Chicago. More so, now that it was burning to the ground.  But she didn’t have a choice. Everyone else was dead, or fleeing. So here she was, on the doorstep of the last person she ever wanted to see. Leaping down from her vantage point, she landed on broken asphalt before making her way towards the tall, silent Tower on the edge of Lake Michigan.

Twenty minutes later she measured up the golden sandstone building, working out possible entry points. Barely a month ago, the immortals inside had allowed the dark God of Chaos to escape their grasp. He’d begun a reign of terror, straight across the northeast. After which, he’d ended up right at her front door.

And she’d watched him decimate her city.

It had taken her a week and every ounce of energy to get here.  She’d slaughtered her way out of New York City. Stolen cars and scavenged ammo and weapons to fight through the hordes of demons and Dark Elves spread across the rust belt, and she was sporting more injuries than she cared to note.

But she’d made it.

Frowning, she gazed at The Tower’s gothic arches, eyes fixed on the carved stone owl crowning the buildings highest gable. “Wisdom is it?” She allowed herself a wry smile. “What’s wisdom gotten us so far in this war?”

No, she thought, when the world was on fire, and the end drew near, only steel and blood would buy it back. And for that, she had an immortal god to see. It had been a thousand years and ten lifetimes, but she still remembered every line of his face, the faint scar marking his cheek, his whiskey-flecked eyes and the set of his stubborn jaw.

After all these years, she doubted he even remembered her name.

Tyr, God of War, rolled his shoulders and felt the dull ache of fatigue.  Months had passed since the God of Chaos had blown through a cosmic portal onto earth and begun waging his deadly war.

And they were losing. People. Ground. Blood.

“And I fucking hate losing.”

The map before him displayed proof of their failures.  Their enemy’s path of destruction cut a stark, black swath from Chicago all the way to New York City, a wide slash of evil straight across the northern United States.  Fingers of death crept out from that blackness like a cancer, stretching toward Fort Wayne, Lansing, Columbus, Philadelphia. Cities wiped from the map forever.

Modern tech was useless against the Orobus’s powers, against the sheer numbers of his otherworldly army. Fuel was growing scarce. Ammo, too. Food would be rationed, starting today. Punching a fist though the concrete wall, Tyr barely felt the impact. The blood dripping from his knuckles however, was an unwelcome surprise.  Proof he was exhausted and his magic nearly depleted. “Fucking perfect.” Distracted, he rubbed it off on his pants.

His eyes darted over the map again, surveying the carnage portrayed by daily updates, big black swathes of ink denoting one catastrophic failure after another.

He’d best recall Thor, Balder and the rest from the eastern edge of Pennsylvania, where they’d been maintaining some semblance of a front line.  Sending them to attack the Orobus’s rearguard had, perchance, slowed him down, but hadn’t stopped him. Word had come in days ago.  New York City had fallen. Who knew what was next?

Certainly not Odin.  Their king had given up. Hiding in his Throne Room, chugging Laguvalin like the expensive scotch was water, Odin had effectively removed himself from day-to-day operations. Ever since the day he’d lost his gift of foresight, he’d decided to drink his troubles away. Sure, Tyr would love nothing more than to march in there, yank the bottle out of the pompous bastard’s hands and demand the king get his head back in the game.

Except he’d already tried that.

But right now, especially, they needed Odin. Even blind, their king was clever and ruthless, two talents Tyr needed right now. But his blindness, and the tailspin that vulnerability precipitated, wasn’t going to be solved overnight. Still…

“Tell me about it.” Behind him, Mir leaned a shoulder into the doorway, his face grave, dust covering his jacket, something looking suspiciously like dried blood crusting his side.

“Ah, you’re back.” Tyr measured up the red haired god, recognizing every ounce of exhaustion in those blue eyes. Mir looked as drained as the rest of them.

“Yeah. Been back a couple hours. Checked in on Balder and the others. The lines are holding at the moment, but no telling how much longer. One thing’s for sure, I didn’t expect to come back to a ghost town.”

“Yeah, well, I didn’t expect to be living in one.” Tyr straightened his shoulders until they were ramrod straight, despising the faint tone of weakness in his voice. “Sydney’ll be thrilled you’re back. I couldn’t have run things without her. She’s been invaluable in helping me coordinate operations around here.”

Mir’s blue eyes flashed. “She’s smarter than you, of course she’s invaluable. Gods, I’ve missed her. And once I head upstairs, you probably won’t see either of us for a couple of days.” Mir rubbed his face, leaving long smears of dirt. “Any sign Odin’s decided to sober up and join the ranks of those who give two shits about the world?”

Tyr sliced his head back and forth. “Won’t even leave his Throne Room. I’m thinking drastic measures are called for. But for that, we’ll need to…”

It was hard to say what tipped Tyr off first, that inward tightening in his gut, or the prickling on the back of his neck, as if a predator were watching. Whatever the feeling was, when he turned, it did nothing to brace him against the bitter cold in Hunter Wallace’s eyes when they found his own.  His breath exploded out of him in disbelief, as he gazed, for the first time in centuries at the woman who had both captured and broken his heart.

Standing in front of him, head raised defiantly, black hair streaming down her back, knives and clothing bloodied, Hunter looked every bit as proud and reckless as the first day he’d seen her. Tyr didn’t know how long he’d been staring, but when Mir cleared his throat, he was sure it had been too long.

“What the fuck are you doing here?” Tyr managed, the mere sight of her causing him to flounder.

“Trying to figure out how you idiots could be so careless to let that monster get away from you and destroy my city.” Her voice was still husky, low, and her shrewd gaze didn’t miss a thing, taking in the maps, the War Room’s general clutter, the disarray of failure.

Mir gave Hunter his own disapproving once-over before spinning away on his heel without a single word, slamming the door behind him, just to make his point. Tyr let the sound reverberate through the room before asking, “Your city?”

Her eyes turned into cold, glittering lakes of amber, as she snarled, “That’s right. My city.” Hunter might have been born a thousand years ago, but clearly, she’d lost none of her sharp edges. “Eight hundred miles away from you, which wasn’t nearly far enough.”

And so it had always been between them. Endless stand offs.  Endless silences.  Endless, pointless stretches of time. Hundreds of years, in fact, where time slipped by without either of them taking a step forward or a step back.

Tyr leaned his hip against the table in what he hoped was a casual pose and pasted the same look over his face.  “Back to my original question. What are you doing here, when the Orobus is in New York? Shouldn’t you be at home fighting with your team?” And because Hunter’s team was the New York equivalent of their band of immortal warriors, Tyr didn’t understand why she’d come all this way.

“You truly are a bastard.”

“Nope, my bloodline’s as blue as the ocean’s deep. Can’t say the same about you, though.”

He had to give her credit, she kept her weapons holstered and her talons sheathed. But those eyes grew darker, and her mouth took on a rigid, intractable set that made him realize his troubles were only beginning.

When she spoke, her voice was soft, and a lesser man might have shuddered. “Once the monster you allowed to roam free in our world is shackled and contained, we can debate our dubious, respective ancestries all you want, Tyr.  Until then…” She leaned in until she stared deeply into his eyes. “I suggest you work really, really hard and use what little brain power you possess to come up with a means to kill him.”

Here in the flesh, there was a subtlety to the woman that his memories failed to capture, a delicacy to her scent, a burnished gold in the texture of her skin which he’d forgotten, and the sight of her cracked him open like an egg.  Memories, he thought, were such deceitful things.  “I’m here because New York City is gone, Tyr. Completely gone.” Her lips trembled. So much so that he stopped the smart ass retort on his tongue and kept quiet while she laid everything out for him. The Orobus’s brutal attack. The loss of her team. Her messy, bloody scramble towards Chicago.

When Hunter finished she blew out a shaky breath before marshalling herself. “Nothing left of the major cities; Detroit, Cleveland, Pittsburgh, those are gone. Some smaller towns survived, and I ran across a few rural areas that are relatively unscathed, but it looks as if the creature’s armies followed the main highways, picking off the bigger cities one by one.”

Tyr offered a shallow nod. “We call him the Orobus. And that’s what I gleaned from my reports, too. A blueprint to conquest. And we handed it to them.”

She didn’t disabuse him of his theory.

“The creature’s power—” She turned away, and her voice faltered. “—killed everything in its path. Forests turned skeletal, cattle bloated and rotting in the fields. Birds fallen from the sky. This creature…wiped out whatever it touched. Hel, the Grim, the Dark Elves…they’re just clean up.”

“The whole city’s gone, Tyr.” This time, her mouth didn’t tremble. “I stayed long enough to get the rest of the team out, everyone who I could. Half headed north, the other south. Following the contingency plan.” Her eyes turned distant. “You know, the one we never thought we’d have to use?”

“How many made it out?”
“Including me? Thirty one.” She didn’t have to say anything else. There’d been over a hundred of their kind posted in New York. Immortals. Haflings. And a few like Hunter. Mortals touched by the otherworldly. All of them warriors fighting the Grim. Tasked with keeping Hel’s minions under control.

“He’s right behind me. Which is the only reason I’m here. To warn you.”

For a second, Tyr wasn’t sure he heard her right. “You came to warn us?”

She paused a moment before replying. “To warn you. He’s already destroyed New York. Now he’s coming back, probably to finish off Chicago. I’d say you have two, possibly three days before he arrives. Hel’s a day behind him with her horde of Grim.”

Her eyes narrowed down to slivers as she measured him up. “You know, for a long time I’ve wondered what it’d be like to see you again. But I didn’t expect you to look like this.”

Firming his shoulders, Tyr lifted his chin. “Like what, exactly?”