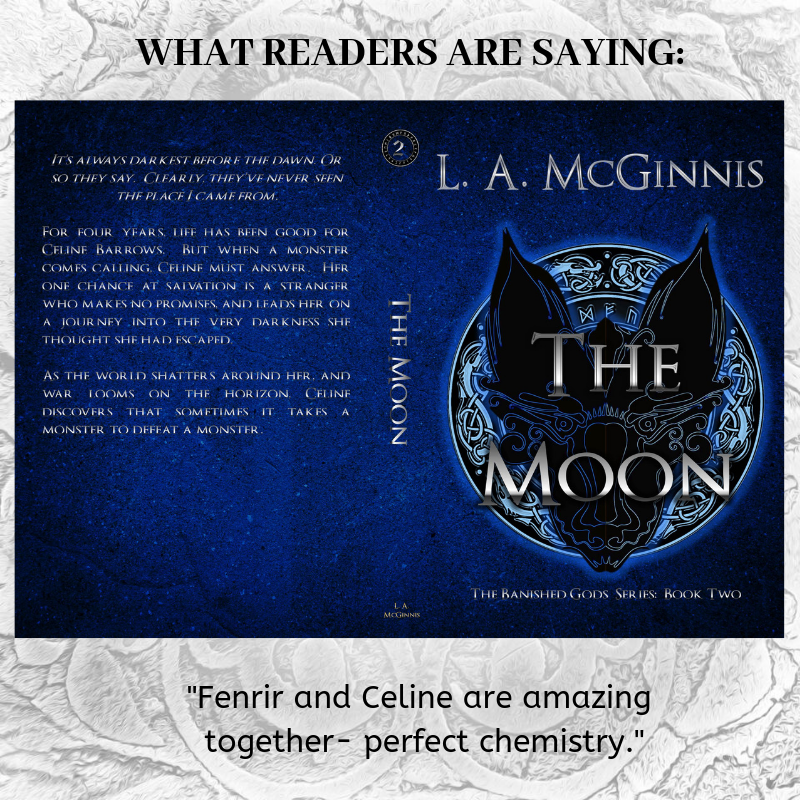 I am so EXCITED!!  Book two in the Banished Gods series, The Moon, releases today!  I can’t wait for you to dive into Celine and Fen’s story- you won’t be able to put it down!  I’ve spent three long years writing these books- I wanted to get the storyline perfect before I release them, so it feels like forever to me since I started this journey.  Celine is an orphan with a tragic past she’s fought hard to escape, Fenrir is an immortal god with no future.

Here’s a short excerpt of Fenrir and Celine’s story:

Horror second, and then finally, condemnation.  And then he would lose her forever.

Everything he feared would come true, as everything she feared stood before her.  She’d reject him, and rightly so. He was a monster. Bred to destroy worlds. Raised as nothing more than a doomsday machine.

Born for one purpose and one purpose only, to bring about the end of Asgard, and he’d done so.  Beautifully. Poetically. And with brutal efficiency. As Celine raised her face to his, as he watched the darkness swirl away in those extraordinary eyes of hers, he waited for her to pronounce his fate with a single glance.

And when Celine’s eyes sharpened, when she saw the beast he’d become, the black, matted fur and the fangs so long he could scarcely close his mouth around them, the eyes so dark they were soulless, she moved. Away from him. And then gazed up so she took the whole of him in.  The sheer immensity of him, the sheer monstrosity of him.

Knew what he’d been trying to hide these weeks from her, and all of these years from himself.

That he was a beast forged in the fires of hell.  That there would be no redemption for him, no happily ever after for them.  Beasts simply did not possess the acumen for such things.  He’d tried, in his stupid, clumsy way, to warn her.  To prepare her.  But nothing prepared you for evil until it stood in front of you in all of its dark glory.

And stand Fenrir did.

As if in answer, she smiled sadly and shook her head.