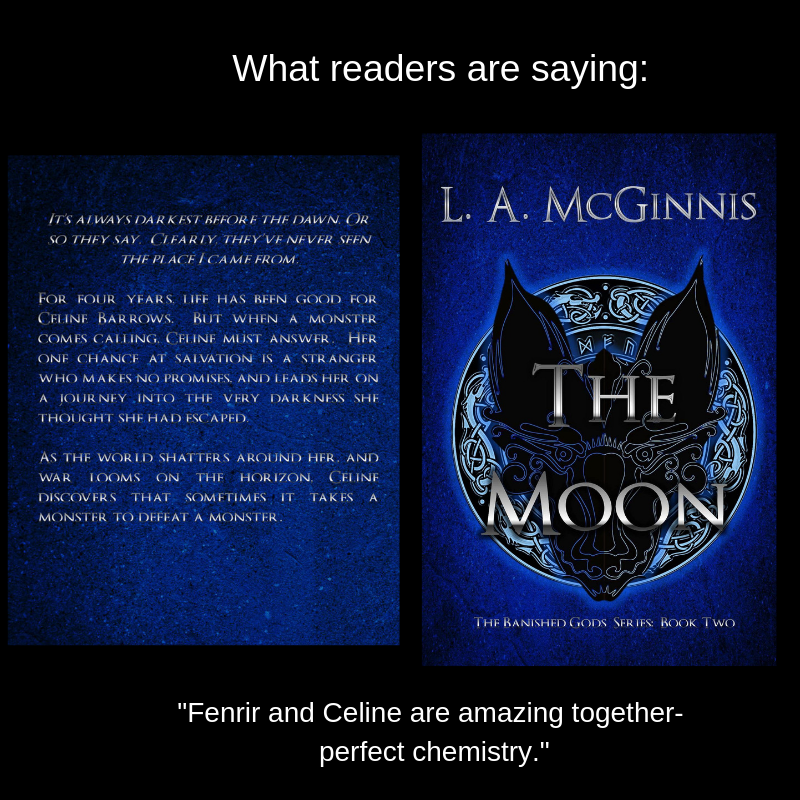 I am getting excited and a little bit nervous!  We’re almost two weeks away from the release for The Moon- book two in The Banished Gods Series!!  Between final edits, and working hardon book three (The Priestess), I’ve hardly had any time to get on my computer or post anything new, but I thought I’d put up a sample chapter and give you a taste of Fenrir and Celine’s story!!

Lying in bed next to Fen, Celine was quiet for a long moment before she finally spoke again.

“When I opened up my eyes, in that…place, and I saw you, for the first time, you weren’t a man. You were a wolf. But I…recognized you. I knew who you were, and I wasn’t afraid.” She went quiet again. “What do you make of that?”

Rolling onto his side, Fenrir propped himself upon an elbow and reached out, kissed her hand, feeling every ounce of strength and frailty contained in those bones. “When I found you, I thought you were part of my dream, until you stared straight into me, only then I believe you were real. I didn’t think. I didn’t have time to think, or stop to think, I just plunged in and swam over and until I reached you.”

“And you were the wolf, the whole entire time?”

“I suppose. I never knew that’s what I looked like. In there.”

“How do you think I knew it was you, that first night? In my apartment, in the dark? How could I have possibly known who you were? I recognized you Fen, right away. Otherwise, I would have hit you with the bat.” His lips hovering an inch away from her hand, he smelled her skin, the clean, fresh scent of it.

“I think…” Fen couldn’t explain the sense of certainty he’d felt when he’d seen her, the absolute sense of inevitability the moment the mists had parted and revealed her to him. “I think in my dream, when I found you, I was meant to find you. I think I was meant to bring you back here, and help you figure this thing out. We’re all bound together by the Fates, Celine.  Life itself is a web, made up of the weft and warp of a billion lifelines woven together, pull a thread and the entire thing unravels, but tighten one up, and the whole thing holds.”

We’re woven together, you and I. Somehow, in all of this, you and I are entwined.

“Well, I’m glad you found me.” She murmured peacefully, her eyes beginning to drowse closed. “Are you more often the wolf? Or the man? Is that why there’s no furniture in your room?”

“I was struggling with that very issue, the night I went to the Otherworld and found you. I was trying to piece myself back together.”

“Why? I would think it might be wonderful, to be two things at once.” Her eyes opened slightly. “To be able to switch back and forth, like you do.  Besides, you changed tonight…well, you started to change. When you were angry.”  She reached up and traced his mouth, pausing on his upper lip, her fingers tracing the place where his fangs grew from. Such a look of quiet expectation on her face that made Fenrir want to run his hands over her, bury her underneath him. But he stayed right where he was, holding her hand, a respectful distance away.

“That was different.  What you saw wasn’t the change, it was a melding of me and the beast, an amalgam of the temper in us both, mostly me, though.  When I remain on this plane for too long without visiting the Otherworld, then my beast becomes difficult for me to control. The wolf is a monster, Celine. He’ll kill anything and everything in its path.  Including you.”

Her eyes softened as she laughed.  You wouldn’t kill me, Fen, I know…”  He gripped her arm and tipped her face up so she looked at him in the eye.

“You need to listen to me. I was created to be a monster, with only one purpose, to bring about the end of Asgard.  Transformed, the wolf does not have the capacity to choose, Celine.  It has no empathy. It only kills. You might think you know me, but I am not the beast, and the beast is not me.”

His voice grew harsh, even demanding, as he warned her, “If there is ever a day I tell you to run from me, Celine, promise me just one thing.” Her eyes did not break from his. “That you will run.”

The Moon releases worldwide on April 2nd, and is available now for preorder: