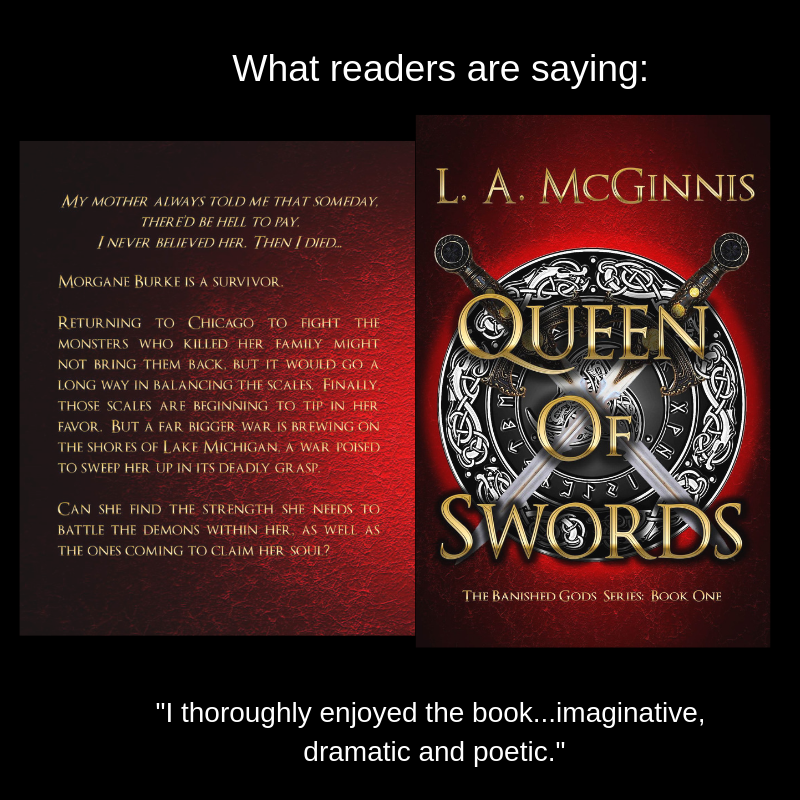 I am so excited for today!!

It’s release day for Queen of Swords- the first book in my Banished Gods series. After working on this series for almost three years, I am so happy that bookone is going to find its way to readers.  Here is a short excerpt:

The way Morgane saw it, she and Loki had only known each other a few days. It wasn’t like they were joined at the hip, for chrissakes.  Which was why, she decided, she was going to tell him everything.

Right after she went to the Underworld and did what she meant to accomplish.

Like they said, better to ask forgiveness than permission, right?

By the time she jogged into Odin’s throne room, Morgane figured she was about three hours late.  The doors flew open before her. “Sorry, sorry, here I am. Better late than never. Ready to go.” The words were barely out of her mouth when the room went whirling around her, and the drawling, bored voice of Odin floated from somewhere far away.

“About time, you’d think I’m running a country club. Have a nice trip. And remember who you’re bringing home with you.  If you can’t find him, don’t bother coming back.”

The whirling, spinning, dropping sensation didn’t stop for a long time. Finally, she hit something hard, and the pressure of a cold, wet surface punched her in the face. Water dripped from her hair, adding to the disorientation when she sat up in complete darkness, pushing tangled strands away from her face. Blackness rippled around her, the sort of shadowy dark that sucks every thought straight out of you.

Like why she had agreed to come here in the first place.

And how she was totally ready to take on this world.

No, this was the kind of blackness that absorbed you until you disappeared. Tucking her knees into her chest, she felt her ribcage expand against her thighs. Contract back down. Felt the warmth of every breath dissipate into the icy, depthless emptiness around her. If it wasn’t for the cold, hard floor underneath her ass, she would have thought she was floating.  But she was somewhere. And she was sitting in water. And her ass was freezing.

Her skin goose bumped underneath the thin t-shirt.

Wet meant water. Cold meant weather. The idea loosened the tightness in her chest. And breathing meant she was still alive. Or at least, she hoped it did.

Squeezing her eyes tight, she imagined two faces. Holding those images as a shield against the dark, she rose to her feet.

The sound of rushing water drew her to the right. With the roar of it thrumming in her ears, she kept walking until mist coated her face, and continued following a far-away glow. Light was good. Not caring what it might reveal, she hurried forward, thinking anything would be better than this soul-sucking darkness. By the time she reached the bridge spanning the river, things were quite…misty. Odin had told her exactly what to do to make it across. Once she managed that, she knew exactly how far to reach Hel’s gates. But after that? It was anyone’s guess.

Total crapshoot. Which was why she was going to wing it.

The person, which was a charitable term, guarding the bridge held out a huge, stubby hand to stop her. She stopped. Waited. Ask me, ask me the question.

Out of its grotesque mouth, the words twisted and warped, “You have but one wish before you cross over. What is it you want?”

Morgane considered. Told him.  It.

“Um, I was supposed to receive a powerful, magic dagger? Isn’t this supposed to be big and fancy or something?” The thing guarding the bridge stared down at her from dark, empty eyes.

She swallowed hard. She’d never once considered not making it over the bridge. This was supposed to be the easy part. The in-the-bag part of this whole plan.  Finally, the…thing stepped aside and gestured down the long span of bridge.

She didn’t need any more encouragement than that.

Hours later, standing before impressive, slightly grimy gates, Morgane didn’t bother to look at the blackened, ruined landscape behind her. No reason to lift her head and smell the bite of sulfur in the air, taste the grit of dust between her lips, the searing ache of brimstone in her lungs. She didn’t want to remember any of it, ever again. The only thing that mattered was she’d made it across. And what remained to be done.

The doors swung inward on silent hinges, revealing a gaping maw of darkness and flickering torchlight. What is it with these immortal beings and their penchant for the dramatic?

“Ah, Odin kept his word. I’d wondered.” When Morgane saw Hel standing between the giant doors, looking all Project Runway and shit in a long, black silky dress and lots of bling, she knew she was in way over her head.

Morgane pushed down her rising fear, but her voice, thankfully, didn’t shake as much as it might have. “Came out to welcome me personally?  I’m honored, I think.”

“As well you should be. I’ve been waiting for hours and hours. I thought Odin and I made a deal.”

“He said nightfall, and here I am.” Morgane surveyed Hel’s to-die-for Blahnik stilettos and heavy, diamond hoops that matched the silky dress perfectly. Which meant the Queen of the Dead didn’t spend all of her time stuck down here. “Nice outfit.”

“You’d be surprised how often I get out,” Hel replied, stroking manicured nails through her hair. “Nothing you’ll have to worry about from now on. Any-hoo, time’s a wasting. Why don’t you come on in?” Hel waved Morgane inside, her arm swooping down in a flourish befitting a Barnum ringmaster.

With the sounds of a million claws scraping the stone beneath her, and the rustling of millions more behind the stone walls, Morgane had only one thing on her mind.  Finding the soul Odin wanted and getting them all back up to where they belonged.

Available now at these retailers: